Staff (2022-06-12). Withdrawing troops from Syria out of agenda: Russia envoy. en.mehrnews.com TEHRAN, Jun. 12 (MNA) — Russia's ambassador to Damascus told local Syrian media that the news on the withdrawal of Russian troops from Syria and transferring them to Ukraine was false, condemning the Israeli regime's attack on Damascus airport.

Contributing Writers (2022-06-11). WATCH: Bashar al-Assad: Russia Restored Lost International Balance (English subtitles). marktaliano.net Damascus, SANA— President Bashar al-Assad said that Russia is facing a war that cannot be linked to the issue of NATO expansion, but rather it is an ongoing war that did not stop even before communism or before World War I, affirming that Russia's power today constitutes a restoration of international equilibrium. "So, we can …

____ (2022-06-12). (W.E.Talk) Exclusive interview with the UAE ambassador to China. ecns.cn China and the UAE share similar development paths, concepts, and goals, which together provide some reference for developing countries to explore modernization independently. 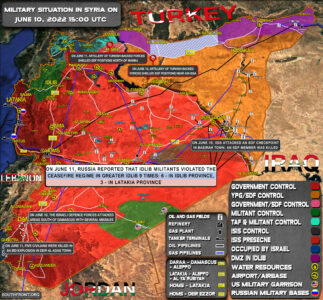 Staff (2022-06-11). Iran says US unjust sanctions targets health care systems. en.mehrnews.com TEHRAN, Jun. 11 (MNA) — The ambassador and deputy permanent representative of Iran to the United Nations has lambasted the US' oppressive and unjust unilateral measures which severely affect the health care systems of other countries.

Henrique Lopes, John Middleton, Oliver Razum (2022-06-11). [Correspondence] Preparing for what we abhor: an obligation of public health professionals. thelancet.com The current war in Europe has increased the threats to population health, including the possible use of atomic and chemical weapons. We are entering the reality of nuclear, chemical, and biological warfare.

Staff (2022-06-11). Turkiye targets areas in N Syria with rockets. en.mehrnews.com TEHRAN, Jun. 11 (MNA) — Local sources in Syria reported that Turkiye has launched a rocket attack on the northern parts of the country.